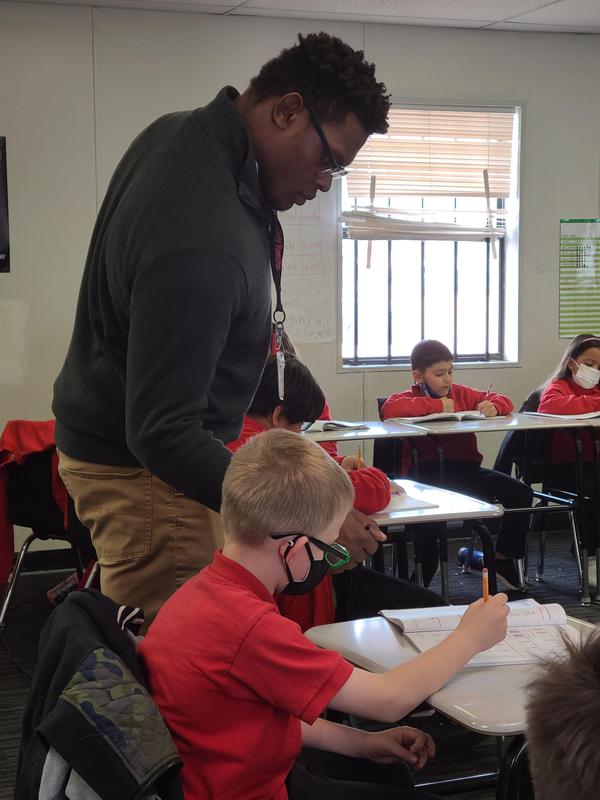 Successful teachers come from all kinds of backgrounds and MAS has some teachers with some incredibly unique and exceptional backgrounds. One of those teachers is Jon Cunningham. Jon is one of the hard-working, committed first-year teachers at MAS who teaches reading to approximately 130-second graders at the MAS Old Coors campus. He has an undergraduate degree from Kent State University in integrated studies, including women’s studies and criminology, a background in case management and mental health, and a teaching certification in the State of New Mexico. In addition, Jon has always had a strong interest in early childhood development and sports psychology.

But his academic background is just one perspective he brings to teaching. What many people don’t know about Jon is that he also brings a different set of skills to his teaching experience as a professional Mix Martial Arts fighter, a former National Football League, a collegiate level football player, and a former wrestler.

When Jon saw a posting for a teaching position at MAS, he was immediately interested in the opportunity to work with young kids. Jon says his first year of teaching has been very rewarding as he has received a lot of support as a new teacher and learned a lot of great skills, even time management. He notes that there have also been some eye-opening moments for him in this first year. Jon says that he is impressed by the continued perseverance of many of the students at MAS, despite the many challenges they face including coming from impoverished homes and experiencing significant trauma. The lack of participation and support from families for some of the children regarding their education has also come as a surprise to Jon as he grew up in a family that valued education.

MMA fighting has provided Jon with a strong basis for teaching. The basic components of success in MMA fighting are closely aligned with success in teaching — challenging work, patience, structure, and discipline. “In MMA, you learn about strategy and patience. You can’t just go in and get knocked out,” said Jon.  “The same goes for teaching. You must be strategic and patient with kids as well.”

What’s next for Jon? Jon has his next professional MMA fight in March. He is also setting ambitious goals in his career to take his work with kids to the next level. He plans to eventually go back to school for both a Master’s degree and a Ph.D. to help him accomplish his ultimate goal — opening a clinic for troubled youth and incorporating sports psychology and athletics to help kids.

MAS is pleased to have teachers like Jon that bring so much depth to the teaching experience. Jon, we’re glad to have you on the MAS team!